The Gravel Birds route was originally designed as a single circular route of 750 km, but in 2023 we are also presenting a version with a shorter distance and a lower degree of difficulty, consisting of an inner loop and sharing a large part of its course with the original route. Both routes start and end in Castro Verde.

The original Gravel Birds route will now be called “Gravel Birds 750” and the short loop “L’Abetarda 270”, named in honor of the most emblematic bird of the Alentejo steppes, the majestic Great Bustard (Otis tarda).

The introduction of this shorter loop, more plural and inclusive, is also an invitation to all those who are starting out in adventure cycling or who simply (yet) don't feel prepared for an overly extreme challenge. 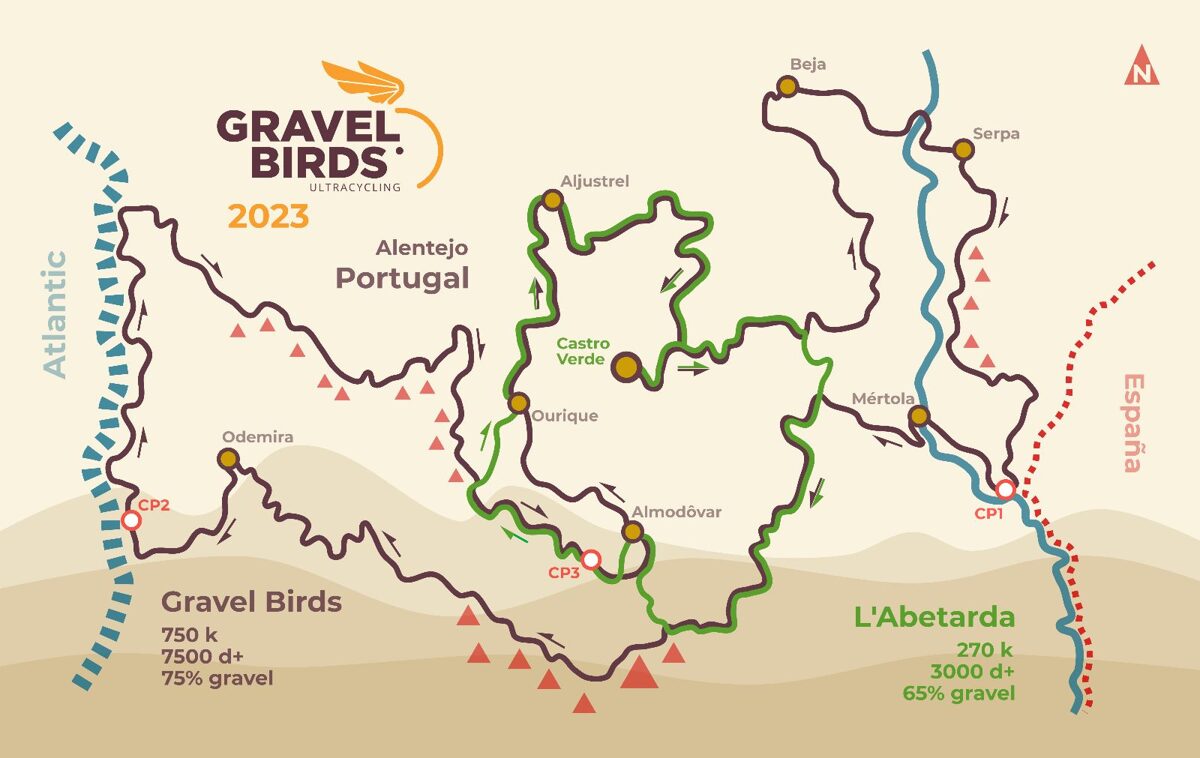 Gravel Birds 750 starts and ends in Castro Verde, covering a good part of Baixo Alentejo region. It’s a physical demanding adventure route that crosses some of the most remote and isolated territories in Portugal.

In the open plains of the inland Alentejo, gravel roads are generally quite fluid and allow for a fast pace, contrasting with the more rugged terrain of the Guadiana Valley and Serra do Caldeirão.

In Pomarão the route almost touches the border with Spain and between Zambujeira do Mar and Porto Côvo it follows along the shoreline.

Along the 750 km, Gravel Birds passes through dozens of villages and small towns, but in some more remote sections there will be many kms to ride far from civilization.

L'Abetarda 270 is a smaller and more accessible version of the Gravel Birds route, forming a central loop and sharing almost all of its course with the larger route.

The first 40 km are common for both routes, separating from the Gravel Birds 750 to rejoin a bit later. On this shortcut, L’Abetarda 270 avoids the harshness of the Guadiana Valley.

Before reaching Serra do Caldeirão, L'Abetarda 270 separates again, heading directly to Almodôvar, saving the hard crossing of the mountains, but missing all the beauty of the Alentejo shoreline.

From Almodôvar to Ourique, L’Abetarda 270 partially follows the original route in opposite direction. After that both routes will become coincident until the end in Castro Verde.

L’Abetarda has an elevation gain of approximately 3000 m, with 65% of gravel.

The vast majority of the route runs along unpaved rural roads. It’s surface is mostly hard packed dirt and smooth gravel (Grade 2 and 3) allowing for a very fast pace. However, there are also some large sections with a more irregular surface (Grade 4 and 5), being recommended to use more versatile tires (above 40 mm will be our recommendation).

Asphalt sections are mainly on secondary roads and with reduced traffic, with only one or two crossings on roads with significant car traffic.

At one point or another, you will need to hike-a-bike. On the old train line of Minas de São Domingos, the bridges no longer exist and it is necessary to find the best alternative for passing through. Along the coastline, between Malhão beach and Pessegueiro island, the path is on loose sand and for sure you’ll need to push your bike.

The routes cross many villages and small towns, but many of them have so few people that there aren’t any commercial services for supplies.

In larger towns you can usually find all your basic needs, so it’s really important that each person does it’s own planning, as there are some remote areas without any support.

There are only a few specialized bike shops along the way, so be prepared to solve most situations on your own.

The routes do not cross deserts or inhospitable mountains, but on several occasions you will wonder if you are still riding in Portugal, especially on Gravel Birds 750 where you will have long hours riding far from civilization.

At several points along the route, but in these more remote areas in particular, the mobile communications network is scarce or non-existent.

The Alentejo region is known for its open landscapes with horizons as far as the eye can see, but in Gravel Birds 750 you will find much more than that.

The elevation gain was calculated using various digital elevation models and is approximately 7500 meters on Gravel Birds 750 and 3000 meters on L’Abetarda 270.

In the design of the routes, we made an effort to reduce hazardous situations, but risk is also a part of the adventure. Riders should always evaluate any situation in order to reduce the risk.

In Alentejo many small rivers are often dry for most of the year, but with a highly variable flow during the rainy season. All water line crossings are crossing points used by local populations throughout the year, even when there is some flow, but the safety conditions for the crossing must be evaluated on site by each rider.

Guard dogs, which protect livestock and farms, are quite territorial and should not be provoked. If it is not possible to keep the distance to keep on route, it is best to remain calm, not show aggression and go slowly or even dismount from the bicycle.

All paths were previously validated and were considered of free passage, but often these paths run on private property.

Along the route there will be gates or fence doors that may be closed. Whenever a door is closed, you must open it, pass through and close it again. These doors are used for cattle management and should always be left as they were.

If your option is to bivouac, know that in many small villages you can find old public laundry washrooms (mostly deactivated) that offer perfect conditions to sleep for a few hours: clean floor, a roof and (with luck) a faucet still with running water.

Rider control along the route is done through the GPS trackers, but additionally there are several checkpoints along the route. To be considered a “finisher”, each participant must arrive at each checkpoint before the respective time barrier and stamp his brevet card.

The landscape as storytelling

The routes in Gravel Birds weren't designed at random: the paths chosen tell a story and many other stories within. And the difficulties along the route are also a part of this narrative, recreating the hardships of the territory itself, just as its people have experienced them since immemorial times.

The sequence of landscapes, the difficulties, the hard and the perfect gravel roads, the melancholy and solitude, the towns and cities, the remote and almost deserted villages, the ruins of the past, the pastures, the cork oak forests, the mountains, the beaches and sea cliffs, the touristic and fishing villages: all this tells the story of Alentejo, a territory that is greater than the sum of its parts.

The birds of Castro Verde

The Castro Verde Biosphere Reserve (UNESCO) holds the most important cereal steppe area of Portugal, which is one of the most representative of the Iberian Peninsula and all of Europe.

This ecosystem is one of the most threatened rural landscapes of the Mediterranean region and is recognized nationally and internationally for its importance for several bird species, like the amazing Great Bustard (Otis tarda), the Lesser Kestrel (Falco naumanni), the Little Bustard (Tetrax tetrax), the Black-bellied Sandgrouse (Pterocles orientalis) or the Montagu's Harrier (Circus pygargus).

Riding the Gravel Birds routes you will likely see many of this endangered birds, so always keep your distance, enjoy the moment and avoid any disturbance.